30 Hours of Driving for Diva

When I reached Monson Maine in 2012, it was my first extended encountered with northbound hikers. It was the first I was able to sit and talk with them, learn from them and generally listen to their stories. They had so many, and were equally sad and thrilled to be finishing.

It is much the same way I would feel months later when I returned on my own Northbound hike.

The Lakeshore House was where I met Moldy Toe and Diva, the first Southbound hikers I would meet and hike with. They were mid 20s, had been married for less than a year and had started their hike together. Moldy Toe had been recovering at the Lakeshore House for about a week, as his toe had become infected in the last 2 days in the 100 mile wilderness, and turned into a serious issue.

Originally, Moldy Toe and Diva had started together, sumitted Katahdin and then set out south. 7 miles into the 100 mile wilderness, Diva decided she just couldn’t do it. But this was Moldy Toe’s dream, and she didn’t, couldn’t deny him that dream. So she said she’d go home and he should continue on the hike and finish, because this was something he had to do.

That’s some love right there. So Diva gave him the gear out of her pack that he needed, took the gear he didn’t need anymore and turned around to the Golden road and hitched back to Millinocket and went home to Ohio.

A week goes by, Moldy Toe gets his infected toe (which spawns his name) and he calls Diva to let her know what’s going on. Diva decides she can’t let him recover alone, so she drives from Ohio to Maine to be with him. A hell of a drive indeed.  She stays with him for a week while he recovers: they go sightseeing on the Maine coast, drive through the country side and generally have a good time. I meet them both at the hostel on their last day together, as Moldy’s toe has healed, he’s setting off in the morning. 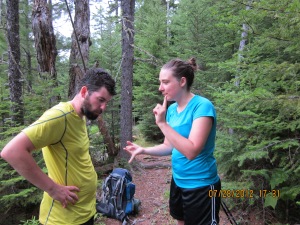 Diva and Moldy say goodbye and I meet Moldy at the shelter out of town where we end up staying the night as Diva drives 15 hours home. He tells me the story and I stand in a little awe of it – a dedicated team that knows they have to let the other do what they want.

We set off the next morning and head south, hoping to cover about 17 miles so we can cross the Kennebec river by ferry early the next day. Around 4pm we stop at a shelter to refill water and snack, and figure out how much farther we’re going. “Another 2 miles should do it, there’s a water source and a ford – we can ford and then set up camp and eat.”

We depart the shelter. And run smack into Diva who is walking North.

Moldy’s mouth was agape, his jaw somewhere down around his ankles.

Diva had decided upon returning to Ohio that shouldn’t couldn’t stand to be without him. She had gone home the first time because he pack was too heavy for her and she wasn’t truly invested in the hike. Now she was. She had put only the bare essentials in her pack, driven back to Monson and then gotten a hitch to Caratunk, where she had told the whole town to watch for Moldy and not let him leave without. Then she’d gone to the ferry, told the ferryman the story and asked him if Moldy had crossed already. “No? Well I’ll just hike north to meet him.” 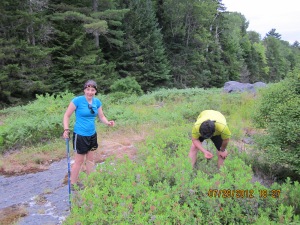 Picking blueberries in Maine was always a worthwhile past-time.

She’d started hiking north at 10am. She only had a liter of water and snack since them, mostly Mike & Ikes. She’d stopped to read every register, checked every crossing to find her husband so she could be with him.

Moldy and Diva were back together and hiking.

We camped by the river ford that night, and pooled our food together to have cheddar and broccoli tuna melt. Diva and Moldy stayed up and discussed what they were going to do the next day.

I didn’t see them much the next day, they got into an argument over the car and what to do with it. They got off the trail. But I think they were okay with that decision. Diva because she’d finally told Moldy what she wanted from him, and Moldy because he’d taken the opportunity to at least try at his dream.

I’d like to think they are happy back in Ohio somewhere. Though really – who is happy in Ohio? (I kid I kid… except for Cleavland.)